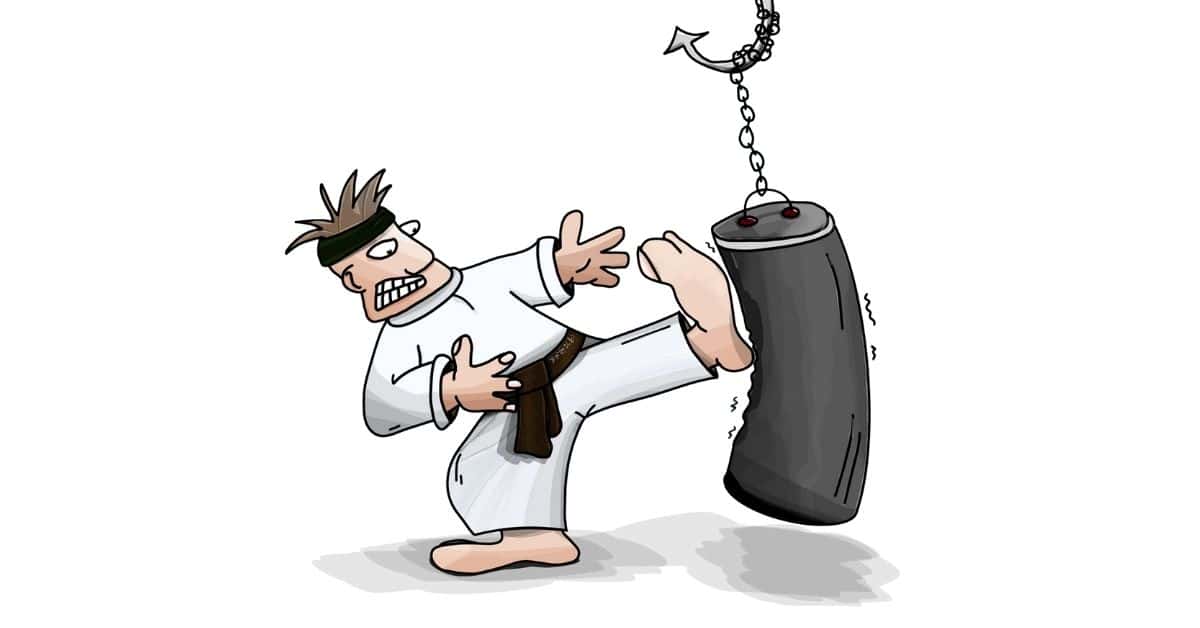 Today, there’s a variety of martial arts. Thus one may get confused when choosing one. Depending on your goal, one may be more suitable than the other. Because of that, knowing the pros and cons of each one; is crucial.

Krav Maga and Sumo are overrated- for they’re not as effective as they seem. As a result, learning them won’t provide as much value as other fighting styles. For instance, Sumo teaches pushing techniques and therefore is ineffective for self-defense.

Although that’s the case, many people learn these martial arts and see success, primarily- Krav Maga. The Israeli military teaches its operators to this day this incredibly martial art. Well, why am I claiming it’s overrated?

Next, I’ll go over each martial art and why it’s not as solid as it may seem. Additionally, I’ll explain how you can ensure you’re progressing in your journey, Thus learning to fight.

Before jumping in, progressing outside of your fighting gym; is crucial. You’ll become capable of learning new techniques more quickly. Thus you’ll become a more suitable fighter. As a result, I wrote a complete guide to training martial arts at home. It’s one of my most researched pieces, and therefore I recommend reading it.

Sumo is a martial art that utilizes pushing techniques to beat the opponent. Thus it’s not as practical for today’s world. Because of that, many people stay away from it.

Although it may seem entertaining and valuable from the outside, the opposite is true. In fact, it doesn’t teach any practical skill that you can use in a real fight. Thus it’s not a fighting style. Instead, you can call it a martial art out of respect for the culture.

Honestly, there isn’t much to say about Sumo’s pros. Other than the rich history it holds, it doesn’t add any value. Because of that, knowing to stay away from it; is vital for your success.

I’ve seen various people claiming it’s a valuable martial art for self-defense. Well, it really isn’t. The sole movement you’ll learn is balance, which may assist in such a situation. However, learning to throw a solid punch will hold more value in self-defense.

Sumo isn’t a practical martial art because it doesn’t teach any actual skill for self-defense. Thus by learning it- you won’t know to fight appropriately. Instead, you’ll practice balancing yourself, which may assist. However, not by much.

The fact is, Sumo is useless. Its rich history may be enough to keep it as a sport. Yet, it doesn’t hold any practical value in the real world. Thus learning it; will be unwise.

There are numerous downsides to Sumo. Yet, I’m focusing on this one- for it’s in a considerable size. Because of that, knowing it; is vital for your knowledge. If you understand to stay away from it, you’ll be solid for your fighting journey.

Should I learn Sumo?

Learning Sumo; is unwise because it doesn’t teach any practical fighting technique. As a result, you won’t gain any value by participating in it. For instance, the only skill you’ll develop is balance. Although it may assist you in self-defense, it’s not enough to become a fighter.

That’s the primary reason you should stay away from Sumo. However, if you want to become the most balanced person worldwide- Sumo will suit you. As a result, you’ll become capable of countering your opponent shoving you.

Other than that, I don’t see why someone would learn Sumo. In fact, many other martial arts teach valuable skills. Because of that, participating in them will; teach you numerous beneficial movements. I wrote an article on the best martial arts for self-defense. If you’re unsure which one you should choose, I recommend reading it.

To summarize, don’t learn Sumo. Instead, focus on other fighting styles that will provide more value. For instance, concentrate on Jiu-Jitsu, Judo, Karate, or MMA. The list goes on.

The Israeli military wanted to teach its operators a self-defense system. Thus they developed Krav Maga. Throughout time, it became widespread worldwide. As a result, many instructors opened KM schools and passed their information on. Now, that caused various issues.

From personal experience, Krav Maga taught me plenty of practical techniques. Well, doesn’t that contradict this article? How is it overrated if I had success with it? Let me explain.

First, I went through a 14 month Krav Maga course. Because of that, I know the ins and outs of it. Thus I write this section with complete confidence.

Although I’m a big fan of Krav Maga, it’s highly overrated. If you learn in an appropriate school- you’ll become a solid fighter. However, that’s not always possible.

Because there are plenty of Krav Maga schools, there’s no quality check. As a result, you can attend martial arts classes and find no success. That happens because the instructor won’t teach Krav Maga appropriately. Because of that, it’s overrated.

Krav Maga is practical. Because of that, you’ll learn self-defense quickly. Thus staying consistent with it; is more manageable than other martial arts, such as Karate.

I’ve seen success using the movements I learned in real fights. As a result, I’m confident you’ll see similar success. Moreover, you may notice I’m a big fan of KM. So, you may wonder- why I claim it’s overrated.

The Israeli military uses Krav Maga to teach its operators fundamental self-defense skills. As a result, they’ll learn to fight quickly. Thus if you learn Krav Maga, you’ll become a solid fighter in a short period.

Overall, the results of this study indicate that the Krav Maga workout used in the study met ACSM guidelines for improving cardiorespiratory fitness and managing body weight. (Source)

The primary downside of Krav Maga is its prevalence. Because of that, many schools began teaching this martial art. As a result, there’s no quality check for the instructors. Thus anyone can teach his take on the fighting style, which is ineffective.

Krav Maga is prevalent worldwide because people believe in learning to fight quickly. As a result, many unqualified instructors teach their take of Krav Maga. Because of that, finding a suitable school; is more challenging than a few years back.

Should I learn Krav Maga?

Although Krav Maga is overrated, you’ll gain high value and learn practical skills. As a result, learning it; is wise. Yet, you must find a solid school with a qualified instructor. That way, you won’t learn unworthy techniques from someone.

Your primary focus should be to find a solid KM school. If you do, it won’t be overrated. Instead, you’ll be learning practical and valuable techniques quickly.

The direct purpose of Krav Maga is to teach self-defense quickly. Thus you gain results and benefits faster than the average martial art. Therefore, staying consistent will come more naturally.

As much as martial arts are valuable, some are overrated. Because of that, knowing which ones are; is crucial for your progression.

I’m a big fan of Krav Maga. However, I can’t say it’s not overrated. Today, most instructors teach quick techniques to end a fight quickly. However, these don’t work when the opponent is resisting. Because of that, they’re ineffective in a self-defense situation.

That said, I recommend learning Krav Maga- if you find a solid school. If you don’t, then stay away from it. However, if you manage to notice a qualified instructor, I encourage giving KM a shot.

If you’re wondering which benefits you’ll gain from martial arts training, I wrote an article answering precisely that. I recommend reading it- if you’re unsure of what to expect from your workout.