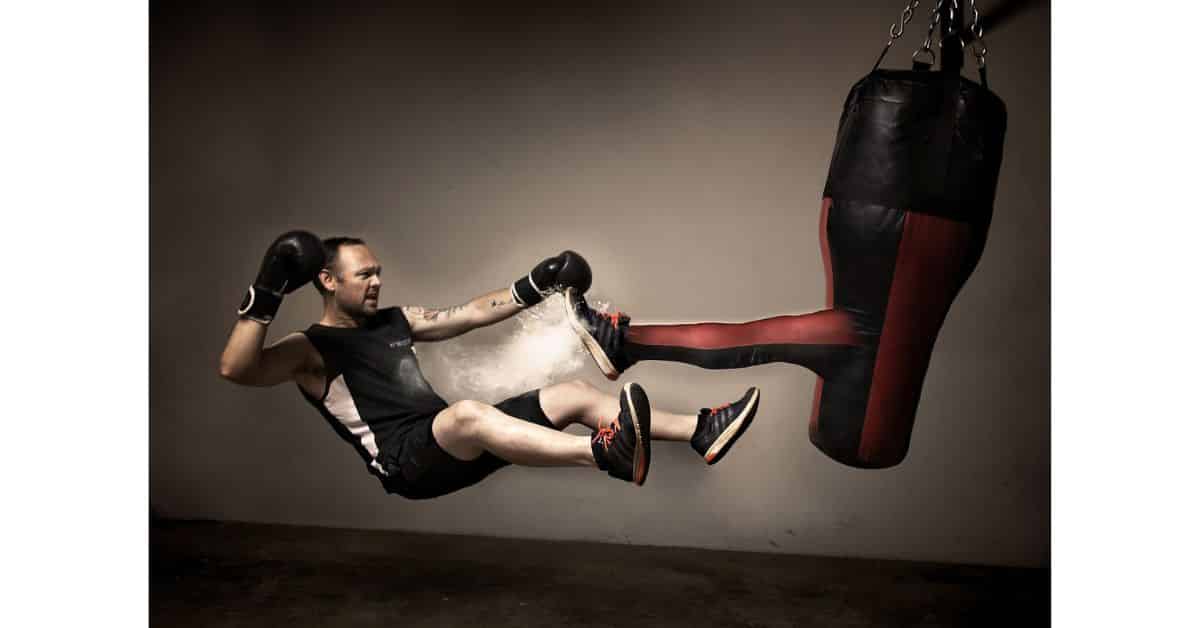 Boxing can get incredibly difficult if you don’t have proper instruction or a coach. Unfortunately, most beginners make the same mistakes even if they aren’t aware of it.

Therefore, this article will tackle some of the most common mistakes boxing trainees make when they begin their training journey. If you want to optimize your boxing training, it’ll be best if you ensure these don’t happen to you.

The following list is the 7-mistakes you should avoid in boxing training.

I decided to list these 7 because I see them most often. Additionally, these mistakes will have the most detrimental impacts on your boxing ability and your health.

Because of that, I’ll present at least one solution for each mistake. Following that, I’ll demonstrate how to avoid and solve each issue. So, without further ado, let’s dive in.

The first issue is one I personally experienced. Moreover, it’s the one that’ll cause you the most long-term harmful damage if you don’t aim your undivided focus on avoiding it. Because of that, I encourage you to ensure you’ll never make it.

Training too often is a common mistake boxing trainees make because the more you train, the more progress you’ll experience. However, there’s a limit. If you overpush yourself to train as much as possible, you’ll be left with fatigued and overtrained muscles, which may cause permanent damage.

The effects of overtraining- are damaging. Because of that, ensuring you’re not participating in more training sessions than your body can handle- is crucial.

To avoid overtraining, you must not train on consecutive days, hence Sunday and Monday. Moreover, 3-times per week is the maximum boxing training you can add to your training routine. That way, you won’t reach a state of overtraining, assuming you sleep and eat well.

So, let’s examine what an optimized boxing training routine would look like.

As you can see, this routine ensures there is no boxing training on consecutive days. If you were to train on Sunday and Monday, you would damage your body in the long term.

The following easy-to-fix mistake boxing trainees make is lowering their guard too often. If you’re constantly doing that, your defensive game will decrease tremendously.

Lowering your guard is a common mistake boxers make because defending yourself from punches is unnatural. As such, it’ll be best to focus on always keeping your guard up. Moreover, when you throw strikes, return your hand immediately to the guarding position.

Eventually, your mind and brain will remember that you need to have your guard up all the time; hence you’ll build muscle memory.

When that happens, you’ll know that you don’t always need to aim your undivided attention on it. In fact, you can let your body do its thing and focus on your other weaknesses.

To avoid lowering your guard, focus your undivided attention on having it up, even if it comes with a cost. Eventually, your muscles will remember that they must always return to that position; it’ll be second nature.

A suitable drill you can perform to avoid lowering your guard is to hit a punching bag like you usually would, but do it slowly and don’t focus on your striking technique. Instead, concentrate on returning to your regular fighting stance, which is with your guard up.

One of the most critical metrics in boxing- is proper footwork. If you master the art of footwork, you’ll be capable of generating more force and speed with your punches.

Neglecting footwork is a common mistake beginner make that will eventually cause a decrease in their performance. As a result, it’ll be best if you focus some of your attention on learning and honing your footwork technique.

It’s easy to stay away from techniques that won’t lead to an immediate improvement in your skill. But, for example, honing your punching skills will lead to immediate results, feeling your punches’ strength and speed increase.

On the other hand, better footwork may not seem as if it’ll attract any results. Nonetheless, the opposite is true. If you hone your footwork, your boxing abilities will be much better.

It’ll be best to focus on improving your footwork movements when you start training.

However, if you hadn’t worked on it when you began training, you may as well start as soon as possible.

Once you do, you’ll notice your boxing abilities drastically improving.

#4- Focusing on your strengths

One of boxing beginners’ most common mistakes is staying distant from their weaknesses. As a result, their skills don’t improve as one. Instead, they begin to develop weak points, which become the main consequence of losses.

If you want to become a solid boxer, you must focus on your weaknesses and your strengths. However, many beginners don’t follow that advice, and they concentrate on ensuring their strengths become better and better. As such, they develop weak points.

To avoid focusing on your strong areas, stop. If you think you’re even close to not touching your weak points, redesign your entire training routine and ensure you’re in touch with your weaknesses.

If you’re training with a coach or an instructor, talk to him about your situation. The coach will most likely help you avoid building weak points, thus preventing future losses.

Have you ever felt frustrated from your training? If you did, I’m willing to bet it was because of a lack of results. But, eventually, results are the ultimate source of motivation and consistency.

You won’t keep up with your training if you don’t notice results.

Consequently, setting small milestones and pursuits is ideal for replenishing your motivation and willpower to keep up with training. Because of that, goals like becoming the best boxer aren’t as effective because you may never reach them.

On the other hand, pursuits such as bettering your punch or learning proper footwork will set you up for success more than short-term milestones.

So, next time you set goals, consider thinking about the near future rather than aiming for the end goal.

Thinking about the near future should be your focus. If you think about the ultimate goal too often, you’ll be left with a lack of motivation and consistency.

Eventually, goals such as becoming the best boxer I can be shouldn’t be your goal.

Rather, aiming for the near future, hence learning a technique, understanding a concept, or honing your footwork, should be your pursuits.

#2- Being inflexible with your training routine

I’d say this mistake correlates with everyone participating in any fitness activity. As such, it doesn’t matter if you’re a boxer or a weightlifter; I encourage you to follow this advice regardless of your pursuit.

Being inflexible with your training routine will cause a lack of motivation and inconsistency, eventually creating a boring routine. Thus if you’re a boxing trainee, it’ll be best if you open your mind to other activities, such as running, weight lifting, and even other martial arts.

Boredom is a primary reason people quit their goals even if they were excited about them a day ago. Therefore, remaining dynamic with your training routine and involving other activities, such as running, weight lifting, other martial arts, and even yoga- will help you stay consistent and dedicated.

To avoid being inflexible, it’ll be best to involve a few activities you can do throughout your day. For instance, if you train in boxing, ensure you run and light weights once or twice a week. Moreover, if you’re a weight lifter, consider training in martial arts and doing aerobic exercises.

Eventually, if you are a dynamic trainee, you’ll have more fun while training, causing an increase in motivation and consistency throughout your life.

The last mistake we’ll discuss is not sparring. If you’re unfamiliar with this term, it’s when you fight that resembles a boxing fight against another trainee.

Sparring is a fantastic way of improving your boxing skills, regardless of your boxing skills or level of knowledge. You can benefit from it because it’s the closest platform that resembles a real fight. As a result, you’ll learn more about defense and offense than all other training methods.

Some people may be scared of sparring because they don’t want to feel pain or don’t want to see their true skill level. As a result, they’ll avoid it at all costs.

Nonetheless, if you allow yourself to reap the many benefits of sparring, you’ll progress exponentially. Therefore, spar as much as possible in your boxing workouts if you want to explode your boxing skills.

To avoid a lack of sparring, it’ll help if you focus on finding fighting partners to spar with. If you don’t, you’ll lose out on the many benefits of sparring.

Additionally, if you’re scared of sparring, as you’ve never been punched in your life, you can always spar with someone who wants to take it easy. With time, you’ll fall in love with sparring, as it’s enjoyable.

Why is boxing training hard?

Boxing training is hard because it’s a mental and physical exercise. As a result, both beginners and advanced trainees find boxing training difficult and demanding. For instance, you can expect to burn up to 800 calories an hour, which is a large number.

Eventually, nothing that’s worth it- is easy. It doesn’t matter how advanced you are in your martial arts journey; you’ll find every boxing session difficult.

Nonetheless, don’t let it discourage you. Instead, embrace the difficult times because these are the times where you’ll see the most progress.

How do boxers prevent overtraining?

What are the disadvantages of being a boxer?

The primary disadvantage of being a boxer is the potential injuries you may face. Here are some common injury spots for fighters.

To end this article, I want to emphasize how beneficial boxing training maybe if you let it influence your life. That’s because many boxing trainees are unable to be consistent and dedicate themselves to training.

However, if you understand my mistakes in this article, you’ll be solid for your journey. Eventually, fixing all these mistakes- won’t take plenty of effort. As a result, it’ll be best if you stick with them as much as possible.

If you enjoyed reading this post, I encourage you to read about the benefits of martial arts.