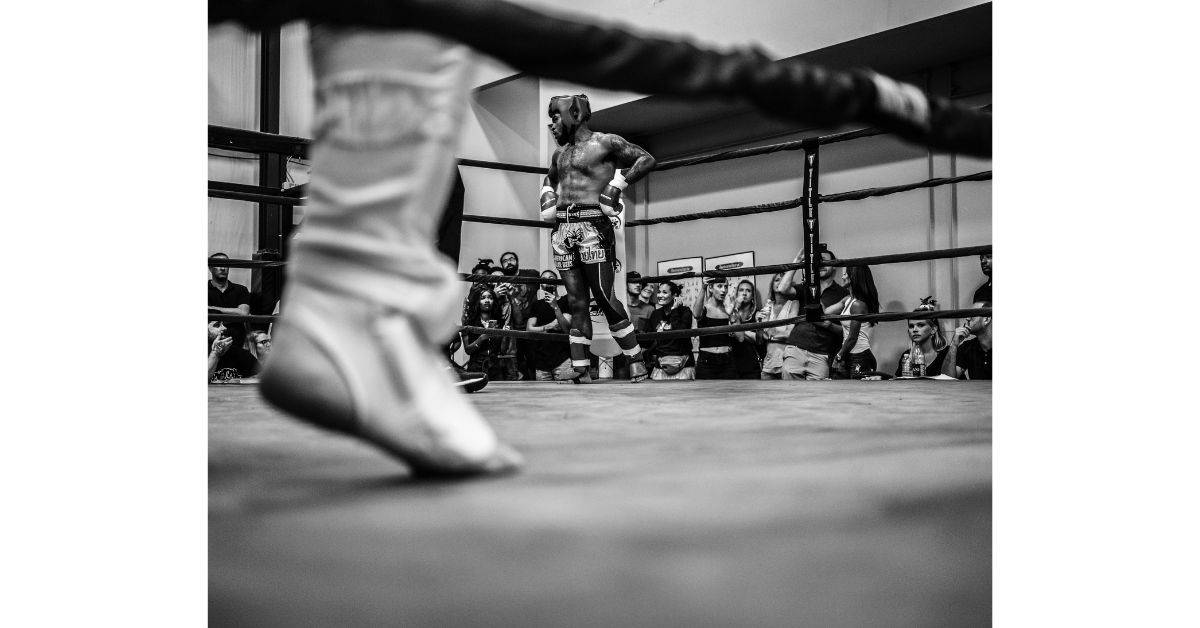 Headgear is a crucial protective gear in boxing. It protects against numerous common injuries, such as cuts, swelling, and bruises, in the face area. However, it doesn’t defend against concussions, which is an extremely common injury. Let’s examine whether pro boxers wear headgear.

Unlike amateurs, professional boxers don’t wear headgear, since there’s a far better chance for the fighters to get brain damage when wearing protective headgear. Nonetheless, it does protect against bruises, cuts, and swelling. But, such injuries aren’t as critical as brain damage.

The long-term harmful consequences of boxing—have been proven time and time again. And still, there’s a better chance, when wearing protective headgear, for brain damage to occur, as a result of long-term boxing training. Most of it, however, is from the training itself rather than the matches.

If you want to buy yourself the best protective headgear, ensure you follow the link to an article of mine on the topic. Reading it will help you protect your most essential part in your body, the head.

Olympics is all about elite level athletes competing against each other. The primary goal, is to ensure all the contenders remain unharmed, even after achieving uncanny results. Boxing is no different; although it’s close to being the most dangerous sport worldwide, the Olympics want to keep its boxers unharmed.

Olympic boxers do wear headgear, as the chance of cuts, bruises, and swollen face after the fight—decreases when wearing protective headgear. Because the primary goal of the Olympics, before breaking world records, is to ensure all the athletes remain unharmed after the competition, they ensured the use of headgear.

The use of headgear—surprisingly, causes more concussions. That finding is extremely important, as the main boxing organizations can start changing the rules, so fewer boxers will experience brain trauma and concussions.

Whether boxers should wear headgear—is a tough question. That’s because most fighters rather not have brain damage and have cuts and swelling on their faces. But, constant exposure to such injuries—can cause permanent damage and be much, much worse than concussions.

Boxers should wear headgear when training or sparring because it prevents constant swelling, cuts, and bruises. However, when competing, it’ll be best to avoid using head protective equipment, as you’ll be less likely to experience brain damage and concussions. But again, you want to avoid constant swelling and cuts.

Headgear is one of the most crucial protective gear you’ll ever wear. Such equipment—is vital to have in your training or while sparring. However, when competing, it’ll be best to avoid wearing it and suffer the bruises. By doing so, you’ll be avoiding brain damage and concussions, which is far more harmful.

What do professional boxers wear

Professional boxers wear cup guards underneath their shorts, boxing shoes, and a custom-made mouth guard. Unlike amateurs, they don’t wear shirts, although it’ll help them avoid rope cuts. Likewise, groin guards are crucial to wear because it’ll prevent accidental damage to the groin area, which can stop a fight.

Boxing shoes help with stability, as they have high-grip. If you compete, such a purchase—is a must. If you don’t buy them, you’ll inevitably be at a disadvantage. So, if you want to buy the best boxing shoes, follow the link to an article where I present the best ones for you to buy.

Why do amateur boxers wear headgear, but pros don’t?

Protective headgear—will help you avoid constant swelling and bruises on your face. Such injuries can be extremely harmful if you constantly experience them. For that reason, amateurs always ensure to wear them. But, there’s a twist. Pros don’t wear them for a solid reason.

Amateur boxers wear headgear because it helps prevent bruises, cuts, and swelling. However, professional don’t wear them for two reasons: first, the chances of getting brain damage is higher when wearing them. And secondly, it’s more entertaining to watch a fight with as little protective gear as possible.

Constant cuts and bruises can be extremely harmful. For that reason, in training and sparring, boxers always wear protective headgear. While it increases the chance of concussions, they want to avoid being unable to spar because of swelling and bruises.

If you want to ensure both the short and long-term safety of your face, such equipment is a must. While you won’t be wearing it in professional matches, you’ll be using it all the time in training and sparring.

While we did discuss the harmful effects of wearing protective headgear, which is more concussions and brain damage, it’ll help you avoid constant bruises and swelling. Consequently, you’ll be more competent of constantly training and sparring, as your face will not hurt as much.

Why do amateur boxers wear shirts?

Protective gear is a must. Even shirts and shorts protect your body from various potential harms, such as rope burns and cuts. And still, the boxing organizations understand that having only the essential protective equipment—will boost entertainment value and overall gross revenue.

Amateur boxers wear shirts to reduce rope burns and be able to wipe sweat and dirt off your boxing gloves. Professional boxers don’t wear shirts, however, because they know how to maneuver the boxing ring and ensure they don’t get rope burns. Likewise, it boosts the entertainment value when there’s less protective gear.

Amateur boxers don’t have to be 18 years of age. In fact, some amateurs are only 13 years old, as that’s the minimum age to get your hands on a license. For that reason, they must always wear all the essential protective gear, with that, they also need to wear supportive ones, such as shirts and headgear.

Does boxing with headgear hurt?

Boxing is one of the most dangerous sports. You’re essentially two fighters trying to knock each other out. Of course, then, that physical pain—will be a part of the game. In training and boot camps, boxers go through a series of exercises that helps them make a habit out of fighting even when there’s physical pain involved.

Boxing, even with protective headgear, hurts—even in the face and head area. That’s because you’re fighting against someone who has honed his or her ability to throw a solid punch. Hence, if your opponent is able to land a hit on your face, it’ll be fierce and impactful. Thus, you’ll feel the pain through the headgear.

And still, the impact you’ll feel with headgear will be much less. However, knockouts are still common amongst amateur boxers, as the impact still exists. Of course, they’re much more common amongst professional boxers, who to remind you, don’t wear headgear.

The topic of protective gear in boxing—has always been controversial. Although you may want to ensure the complete protection of yourself, it may be impossible if you compete professionally.

There’s also the aspect of entertainment value. Would you watch boxing if the boxers had to wear pads all over them, to ensure they don’t feel any physical pain? I would guess not.

Although there are more concussions with headgear on, it does reduce the impact and helps avoid cuts, bruises, and swelling. Such injuries can ensure a boxer is unable to step into the boxing ring for the near future. So, be sure to protect yourself, as that’s the first priority for everyone around you!

If you enjoyed reading this article, you’ll also enjoy reading about the muscles that make you punch harder. Knowing them will help you work on building muscle mass in these groups, which will increase your punching power.

link to Can Professional Boxers Fight in the Olympics?

Continue Reading
link to Boxers – How Long They Wait Between Fights?