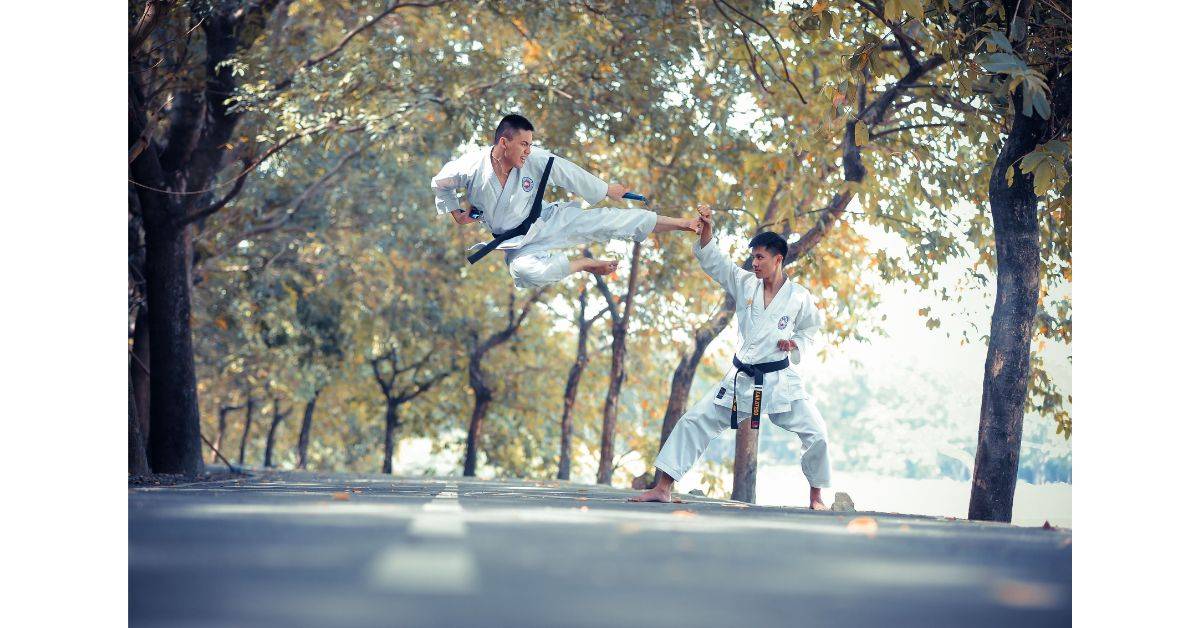 The World Karate Federation (WKF) implemented some rules that govern the types of techniques you must use on your opponent, particularly kicking techniques. That might have had you confused as to where on the opponent the kick should land to earn you more points because each destination has its awarding system.

You might want to work on your kicks. The best way to do this is to first know where you want your foot to land. So, in Karate, can you kick someone in the face?

A karate kick to the face is legal and more common than a low kick, which is even prohibited in karate competitions, even if the kick appears to be too low. Kicks to the face earn the most points, three, and are referred to as “ippon.” Although a kick to the face is permitted, it should not be so strong that it results in a knockout.

You must control the kicking leg and only perform “Jordan Geri” when you are fit enough. “Jordan Geri” refers to a kick to the upper body. Jordan is a karate term for the neck, face, and head, and “Geri” is a kick.

It will depend on the style of sports karate you practice if you want to intervene in karate combat with a good, solid kick that could knock a few teeth down or get through your rival’s neck. Here is a list of some well-known sports karate styles that teach a martial artist the potential to kick someone in the face.

Karate styles that teach kicking to the face

Kicks to the face are permitted in this style of karate, but punches are not. Kyokushin Karate not only allows face kicking, but it elevates it to a whole new level, where you don’t get a point for any technique, including a face kick, when a kick causes the opponent to be dismantled. They then have about fifteen seconds to get to their feet. Face kicking is highly encouraged, if not required.

Competitions can range from semi-contact to soft contact depending on the organization. However, the rules are similar to Kyokushin karate rules, with the exception that you must touch to score and not knock the opponent down. Face kicks are very much still allowed.

Kicks to the face are unavoidable in this style. However, because it is soft contact, any strike that appears to be too hard will result in a penalty. If the damage is severe enough, it will result in immediate disqualification from the competition.

This sport karate style is also full contact and allows for face kicking. However, there is a catch. Participants donned face masks and headgear. So, while you can kick someone in the face, breaking their nose or knocking a few teeth out of their jaws will be extremely difficult.

This technique first appeared in Hawaii in the early 1950s. Adriano Emperado, who later founded Kajukenbo, was taught by William Chow. To be precise, he is credited with its creation, but its evolution is the result of the efforts of five different martial arts masters: Emperado, Peter Choo, Frank Ordonez, Joe Holck, and Clarence Chang.

The name Kajukenbo is derived from the five styles: Ka – Karate, Ju – Jujutsu and Judo, Ken – Kenpo, and Bo – Boxing. They incorporated some of the most important techniques from each martial art into this blend. It also allows kicking to the face, and it is extremely effective in combat.

It’s the second of the four fundamental karate styles. It developed concurrently in Japan and on the island of Okinawa and was primarily influenced by the Okinawan Tomari-te group, the Shind Yshin school of jujitsu, and the Shotokan style of karate. It employs both hard and soft techniques, with a preference for the latter. The majority of the stances are natural. This style has a total of 15 kata.

This is the third fundamental karate style. It developed in Japan and the island of Okinawa at the same time as the former, but with very different influences. The main influences on this style, which combines hard and soft techniques, were the Shuri-te and Naha-te groups. Deep and natural stances. This style contains the most kata (94).

The final of the basic styles, interestingly, originated on the island of Okinawa. The Naha-te group and the Chinese martial art Fujian White Crane influenced it. It also employs both types of techniques as well as a mix of deep and natural stances and teaches kicks to the face too. The total kata in this style is 12.

What kicks are allowed in karate?

Karate incorporates a wide range of kicks, from straight to rotational, with applications in both competition and street situations. Some kicking techniques are prohibited in tournaments to avoid causing serious injury to your opponent.

However, in the street, you can use a variety of dangerous techniques to defend yourself. Generally, there are only two famous kicks that are highly encouraged to be executed to “Jordan” levels during sporting events, but with great control. These kicks include, but are not limited to, the roundhouse and hook kicks.

The following list is kicks which are allowed to use in the art of karate:

Mawashi Geri, or the roundhouse kick, is a common Kumite kick because of its strength, quickness, and ability to strike a wide range of targets at various heights. It is launched with the front leg for a swift attack or the back foot for added vigor.

When properly applied to the head, it results in “ippon,” or three points. After a suitable sidestepping, it is typically performed as both an attack and a counterattack using techniques like kizami zuki, gyaku zuki, etc.

“Ura Mawashi Geri” is the name for the hook kick. One of the most frequently used karate kicks that are quick to the head, hard to block and escape from, and simple to control. After careful timing and possibly grabbing your opponent’s lead guard, it is typically executed. It also offers a quick defense against the majority of attacking methods.

What is the deadliest kick in karate?

Although it’s less common in MMA than roundhouse kicks, the karate front kick is the deadliest kick in karate. The front kick is powerful because it is challenging to block, especially when executed with precision. Opponents are frequently unprepared because the strike comes at them directly.

It is also known as the Push Kick or Straight Kick, and the UFC champion Lyoto Machida utilizes this kick a lot in most of his fights.

Knowing all this, you can now plan and reorganize your training to focus on developing the particular techniques according to the karate style you practice. Don’t forget to use kicks like the Yoko Geri, Mikazuki Geri, Kakato Geri, Mae Tobi Geri, Tobi Yoko Geri Kekomi, Hiza Geri, and stomping kicks to protect yourself.

Along with all potentially harmful strikes like knife hand strikes, spear hand strikes, knuckle fists, elbow strikes, etc., which are very useful in street defense for easily outpacing adversaries and avoiding danger. These techniques mentioned are all permitted in karate sports.

I highly encourage you to follow the link to an article of mine about Karate’s belt order—if you enjoyed reading this article.