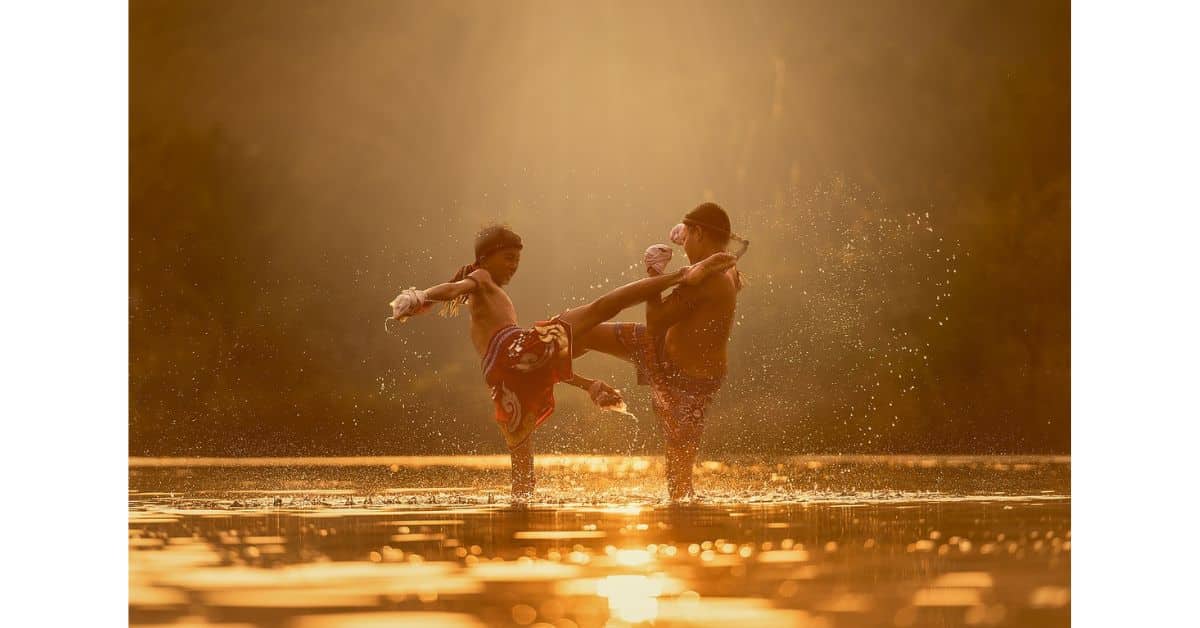 Have you ever wanted to know how to fight? Learning martial arts is the primary way you can do so. In fact, if you dedicate yourself to training, you’ll learn how to fight quickly and naturally.

Moreover, different fighting styles teach other fighting techniques. For instance, boxing is the art of punching. That said, a leading technique in martial arts is kicking, effective, and uncomplicated.

So, here are the best martial arts with the best kicking techniques:

I believe all these martial arts are suitable for self-defense and will teach you how to kick. As a result, if that’s your goal, I have no doubts you should learn one of them.

In fact, I encourage you to start as soon as possible. That’s because the earlier you begin your journey, the earlier you’ll notice results, such as better physical condition and the ability to fight.

However, that’s not all. Medical publications have proven the benefits of martial arts time after time. So, here are some benefits you’ll experience if you train if one of these fighting styles with the best kicking techniques.

The list goes further than what I decided to show. So, for example, your overall well-being will also improve.

Now, let’s dive into the particular martial arts and see what each is best at.

The first martial art that teaches effective kicking techniques is Karate. You must live under a rock if you have never heard of it.

Karate is a fast-paced, effective, and dynamic martial art. It teaches many techniques, including kicking, punching, and even grappling. Thus those who learn it will become all-around fighters that know how to fight appropriately.

Countless movies, such as Karate Kid, have the word Karate in their title. That’s because it’s one of the most popular martial arts in the world.

It all started when the people of Okinawa Island in Japan- wanted to learn self-defense. As a result, they constructed a new way of fighting, which evolved into what we call, Karate.

Moreover, some of the martial arts on my list- are modern ones. As such, they may be more effective for self-defense, but they lack a particular aspect; they don’t have a rich history backing them.

On the other hand, if you learn Karate, you’ll also learn about the Japanese culture and how it affected the martial arts world. Because of that, some may find it more enjoyable and suitable to learn a traditional martial art such as Karate.

In short, Karate is a fast-paced martial art that teaches many types of techniques, such as kicking, punching, and grappling. As a result, it makes its trainees solid fighters- capable of winning fights swiftly.

In the 4th position on my list, we have Mixed Martial Arts (MMA). Today, it’s a prevalent fighting style. Specifically, it’s the second most popular martial art globally. Truly inspiring.

MMA is a fighting style that combines many techniques from different martial arts to create the ultimate way of fighting. As a result, at elite levels, such as in the UFC, the fighters are the best in the world. In addition, it teaches kicking to an incredible level, as it combines many kicking techniques.

To ensure you understand how powerful MMA can be, I’ll say that it’s the best martial art worldwide. There isn’t a single style that can overpower it in the real world.

You’ll see how a single kick can finish a fight in the video. Now, imagine fighting against someone who is not an elite MMA fighter. Then, things will be much easier.

MMA combines countless kicking techniques from martial arts, such as Taekwondo, Kickboxing, and Karate. Because of that, its trainees will be at the top of their game regarding knowledge to kick fiercely.

I encourage you to begin studying MMA if you want to become the best fighter possible. But, unfortunately, some martial arts are restricted in their techniques. As such, their trainees won’t be capable of beating someone whose knowledge of fighting goes way beyond the restrictions. As such, MMA is one of the best fighting styles.

In the 3rd place- we have Muay-Thai, a martial art that originates from Thailand. Moreover, it teaches fantastic and effective fighting techniques. So, let’s look at why it’s as effective.

Muay-Thai is a martial art that teaches kicking, punching, and grappling. The kicking movements it teaches are incredibly effective since they can cause massive damage quickly. For instance, if you know how to throw a fierce body kick, your opponent will be down after a single hit.

Essentially, many of the kicks you’ll learn will cause massive damage quickly. However, that’s not what makes it most effective.

Instead, Muay-Thai allows you to combine many kicking techniques to create unique combos, such as 2-body kicks.

Following this, I’ll include a video that perfectly demonstrates 7-kicks you’ll learn in Muay-Thai. You’ll learn plenty about the martial art from watching it. As such, I highly encourage you to give it a view.

As you’ll see in the video, if your opponent doesn’t know how to defend against fierce kicks, you’ll win without a single obstacle. That said, mastering the art of kicking- is challenging. As such, you’ll have to dedicate much effort and time to progress in Muay-Thai.

The 2nd best martial art with the best kicking techniques is Kickboxing. As you may know, it’s not a traditional fighting style but modern. Because of that, it doesn’t have a culture behind it, which may be a disadvantage to some.

Kickboxing is the art of punching and kicking. I’ve seen plenty of Kickboxing trainees finish a fight with a single kick, as it can lead to other combos like a hook. That’s why I listed it at #2; its primary focus is on kicking, an effective movement.

Kickboxing is one of the best martial arts one can learn for many reasons, primarily self-defense.

That said, its trainees will gain many benefits, such as increased confidence, better physical shape, better endurance, improved well-being, and boosted mental health. As such, wise are those who learn it or any other martial art.

Honestly, if you can train to feel one of these benefits, your life will drastically improve. Imagine having all these benefits in your life; wouldn’t your overall well-being be better?

And the martial art with the best kicking techniques goes to Taekwondo.

Taekwondo is a martial art whose primary focus is kicking. As a result, its advanced trainees will be able to kick incredibly well- leading to them being able to win fights quickly. Additionally, it involves some punching but at a much-decreased level of focus.

I’ve seen plenty of people succeeding with Taekwondo. In fact, I don’t remember the last unfulfilled trainee. Because of that, I owe my great respect to this martial art, which positively changed many people’s lives.

So, here are some kicks you’ll learn in Taekwondo.

Some of them can knock an opponent with only a single land. Consequently, they’re highly effective for self-defense and general fighting.

To summarize, consider Taekwondo if you want to learn how to kick effectively. That’s because its primary focus is on kicking. As a result, you’ll learn many types of kicks that will transform you into a fantastic, solid, and capable fighter.

Which martial arts use kicks and punches?

Kicks and punches can be incredibly effective if used right. For that reason, many martial arts teach either or both. So, let’s see which ones teach both of them.

Numerous other martial arts teach both. However, these are the primary ones I decided to include since you’re most likely familiar with all of them.

Eventually, if you decide to study one of these, you’ll learn to fight aggressively because you’ll learn how to punch, kick, and even grapple. Because of that, you’ll become a capable and dynamic fighter.

Which martial art should I learn?

All martial arts serve some value. For instance, Muay-Thai and Kickboxing will make you a solid fighter that knows how to kick. But on the other hand, boxing is the art of punching. Hence you won’t learn to kick in boxing.

You should choose your martial art based on which fighting techniques you want to learn. For example, if you want to know grappling movements, Jiu-Jitsu is for you. Rather, if you want to study punching and kicking, consider Muay-Thai, Taekwondo, o Kickboxing.

If you want to learn more about which martial art you should learn, I wrote an article that goes in-depth to help you find the most suitable fighting style for your desires.

Which martial art has the best kicking techniques?

The martial art with the best kicking techniques is Taekwondo, as its primary focus is kicking. As a result, if you learn it, you’ll become a solid fighter that knows how to kick fiercely. For instance, some techniques you’ll learn will be the front kick, side kick, and back kick.

That said, that may not be the most suitable one for you. For instance, consider other martial arts such as BJJ or Judo if you want to learn grappling movements.

Nonetheless, Taekwondo is a fantastic martial art that will make you a capable fighter. Therefore, if you want to learn self-defense and better yourself- I encourage you to begin practicing it.

What is the strongest kick in martial arts?

Martelo de negativa is the strongest kick in all martial arts. The fighting style that teaches it is Capoeira, which is traditional and mainly focuses on kicking. As a result, if you want to learn the most powerful kick in martial arts, consider studying Capoeira.

So, why didn’t I list Capoeira in the martial arts with the best kicking techniques?

As such, although it involves the strongest kick in martial arts, I still felt the need to leave it out. If I were to recommend it to you and you were to start learning it, you may not have been satisfied with it, as it wouldn’t have taught you effective fighting techniques.

Learning any martial art- is wise because you’ll learn to fight appropriately. Moreover, you’ll gain physical and mental benefits, such as increased confidence and self-esteem, which can drastically improve your life.

The martial arts with the best kicking techniques are MMA, Muay-Thai, Kickboxing, Taekwondo, and Karate. Thus if you want to learn how to fight while using kicks, it’ll be best if you learn one of them.

If you enjoyed this article, I also encourage you to read about the 6-ways you can increase your punching power.