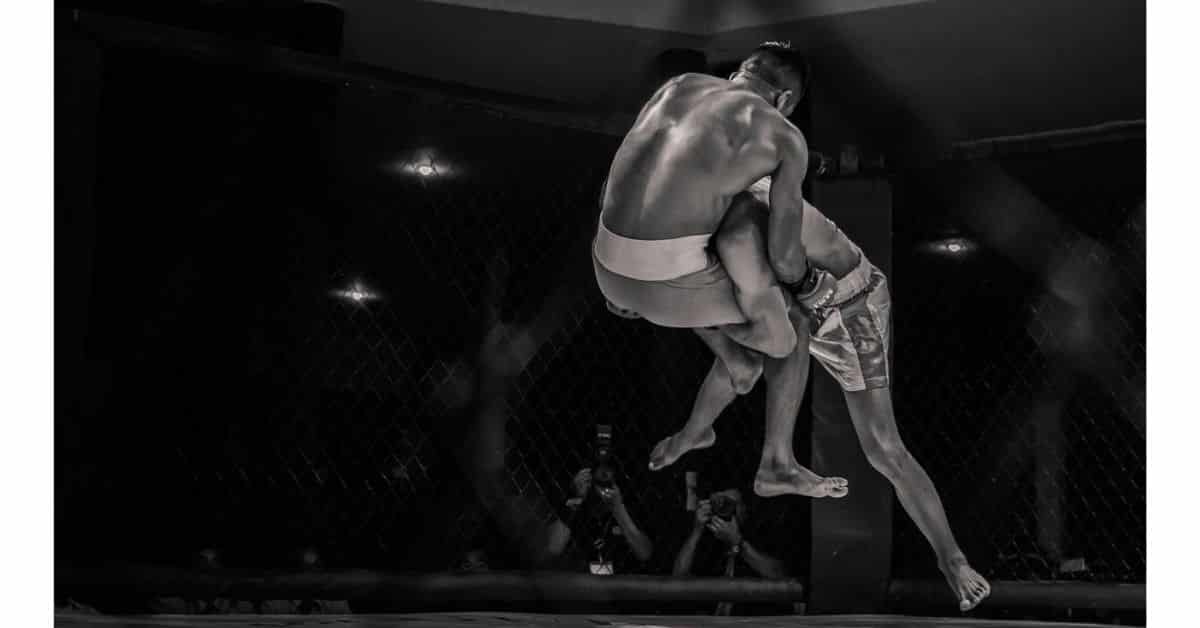 If you want to become a fantastic MMA fighter, knowing which fighting styles are best for it- is crucial. If you don’t, you may struggle to build a solid basis for your fighting career.

On the other hand, if you learn a martial art suitable for MMA, you’ll find that your skills improve exponentially. As a result, you’ll progress faster than your peers and eventually become a solid fighter.

While you may be more familiar with some fighting styles in this list, others may not ring a bell. Because of that, this article will examine and demonstrate the different martial arts and what they’re best at.

I want to mention that while one fighting style may be more suitable for you, others won’t since they won’t excite you as much. As a result, you’ll be left empty and won’t experience the results as much.

Consequently, I would encourage you to begin training in the fighting style you want to learn- regardless of whether it appears in the article.

So now, let’s dive into the specific fighting styles and how they benefit us. Moreover, I’ll demonstrate what each teaches and why they’re suitable for MMA.

At #5, I listed boxing for a primary reason; you can combine it with many martial arts to create a deadly skill set. For instance, imagine yourself being a solid boxer and knowing Judo. Well, now, you can beat anyone regardless of your fighting ability.

Boxing is suitable for MMA because it provides the basis for most fighters. As a result, you can combine it with many fighting styles, such as BJJ, Judo, and even wrestling- to create a deadly skillset. Moreover, it’s incredibly uncomplicated and won’t take as long to learn as other martial arts.

As I mentioned in the first paragraph, if you know boxing and you combine it with Judo or any other grappling fighting style, you’ll become unstoppable. I can’t emphasize how important it is to have an easy-to-learn martial art as your basis.

Eventually, it won’t take long until you master the art of punching. Then, you can explore your ability to fight when it happens by adding another martial art to the equation.

I’ve been a boxing trainee for several years now. Thus I know how straightforward it is. Because of that, many elite fighters adopt it as their secondary style, and now they know how to throw fierce punches.

When you combine this ability with the ability to grapple, you will dominate your competition effortlessly.

However, don’t get too excited. Before you even consider boxing as the fighting style you’ll learn, ensure you do your research. Who knows, you may not like it as much.

Jeet Kune Do (JKD) is a rather unpopular martial art. However, the fact that it won’t ring a bell for most people doesn’t mean that it’s not incredibly powerful. Instead, the opposite is true.

Jeet Kune Do is a fighting style that Bruce Lee, a martial artist, and a movie star, explicitly constructed for self-defense. As a result, the techniques it involves can cause massive damage quickly. Because of that, MMA platforms such as the UFC- ban the use of some Jeet Kune Do movements.

If you want to learn proper self-defense, consider Jeet Kune do. It’ll teach you how to punch, kick, and grapple effectively. Therefore, if you learn it, you can expect to become a competent, dynamic fighter.

Jeet Kune Do is suitable for MMA because it grants its trainees a broad skill set. Hence Jeet Kune Do trainees will adapt to any situation, such as encountering different fighters.

Nonetheless, many Jeet Kune Do techniques can cause such a large amount of damage that many MMA organizations, such as the UFC, have banned some JKD techniques.

Thus if you desire to compete in MMA, you may not want to choose it before checking the local guidelines in your chosen competition.

Today, this fighting style is an Olympic sport, providing a platform for many martial artists to show their abilities to millions of people on TV. You’re likely familiar with it, so I won’t expand the introduction; it’s Judo.

Judo is a traditional martial art that originates from Japan. Its primary focus is throwing grappling techniques, which are highly effective fighting movements. In fact, if you successfully land a Judo technique in a real fight, the odds are that you’ll win the encounter since Judo techniques cause massive damage quickly.

It’s suitable for MMA because, like the following 2 martial arts, it allows you to finish a fight with a single move. As a result, elite MMA fighters use Judo techniques to beat their opponents and eventually come out on top aggressively.

If you still don’t feel as attracted to Judo, here are some benefits you can expect from consistently training in it:

Judo will undoubtedly make you a solid MMA fighter, as you’ll learn how to throw your opponent to the ground and thus gain the advantage.

Here’s a well-made, fantastic video about Judo in MMA. I encourage you to watch it if you are interested in Judo.

If you reached this far in the article, you might want to find out what are the best martial arts for MMA. Well, I chose wrestling in our second spot, a respected place.

You already know the drill. This may cause some controversy…

Hence wrestlers can dominate their competition by ensuring their opponents have no way of defending themselves. Honestly, many people don’t appreciate wrestling for what it can teach and educate.

For instance, takedowns and throws are among the most effective martial arts and self-defense fighting techniques. Consequently, if you find yourself in a dangerous situation where you must use self-defense, wrestling will help you to walk out of that situation healthy.

If you want to read more specific examples of wrestling movements, I wrote an article about the best takedowns and throws in martial arts, and I highly encourage you to read it.

So now, I’ll include a video demonstrating the true power of wrestling. Check it out for yourself!

This video explains why wrestling is the perfect martial art for MMA. Essentially, the wrestlers determine when the fight will go to the ground. As a result, they have utter control of the situation, which is an immediate advantage to the wrestlers.

So now that you know what the best fighting style for MMA is, let me explain what BJJ (Brazilian Jiu-Jitsu) is and why it’s incredibly effective.

BJJ is a fighting style that teaches ground grappling techniques, which are highly effective for self-defense and MMA since they allow you to finish a fight with a single technique. Moreover, defending against the means of BJJ masters is incredibly difficult because they mostly control the situation.

If a BJJ trainee were to face an elite fighter that doesn’t know how to defend against such means, the BJJ trainee would immediately gain the advantage.

Additionally, BJJ is the perfect MMA basis because it teaches countless lessons about fighting. So, even if you face an elite MMA fighter, you’ll be capable of maneuvering your opponent on the ground, which is highly effective.

BJJ teaches various types of chokes and submissions. As such, you can finish a fight in a brief period, as you only need to land a single technique to win the fight.

In the UFC, many fighters use BJJ to force their opponents to surrender in a single round, which means that BJJ is effective.

Nonetheless, some will claim that BJJ isn’t as perfect as I put it to be. Well, nothing is. So, how can you ensure that you’re using BJJ in a near-perfect way?

The primary takeaway from this article is that you can combine various fighting styles to create a broad skill set. Now, a comprehensive skill set is a start to becoming an elite fighter- capable of adapting to any given situation.

What’s the best fighting style in the UFC?

The best fighting style in the UFC is Brazilian Jiu-Jitsu because it teaches techniques you can use to secure a win with a single technique. As a result, many UFC fighters, such as Nate Diaz and Anderson Silva, use BJJ grappling techniques to dominate their competition and finish fights instantly.

The best MMA combination is BJJ and Muay-Thai since they complete each other. As a result, the fighters that know BJJ grapples and can also throw a powerful hook dominate their competition, as their skill set is broader than the average UFC fighter.

That said, various fighters experiment with many combinations. To understand my point better, I’ll give you an example.

Anderson Silva is one of the best MMA fighters in the history of the UFC. Can you guess what combination of martial arts he uses?

While he’s a black belt in various martial arts, he started as a Muay-Thai practitioner. Moreover, following his victories, you’ll notice that he has many wins by submissions, which are BJJ chokes.

Is boxing suitable for MMA?

MMA is a suitable platform for fighters to showcase their fighting abilities. Because of that, various elite fighters eventually combine a few fighting styles to create an ultimate skill set.

As a result, fighters such as Anderson Silva and Khabib Nurmagomedov are at the top of their game since they know how to utilize many fighting techniques, such as grappling and striking.

The 5-best martial arts for MMA are:

Those who combine many fighting techniques are those that’ll dominate their competition. Because of that, if you want to become the ultimate fighter, it’ll be best to learn a grappling-based martial art, such as Judo, BJJ, and wrestling, and combine it with a striking-based fighting style, such as boxing, Muay-Thai, and kickboxing.

If you enjoyed reading this article, I encourage you to read about the best celebrity boxers you should know about.